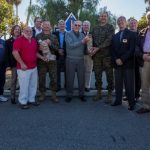 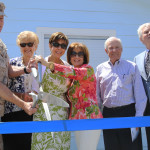 CAMP PENDLETON, Calif. — The San Diego Nice Guys and Marine Corps Base Camp Pendleton held a ribbon cutting ceremony to commemorate the opening of two beach cottages at San Onofre Beach, April 17. The cottages were dedicated in honor of Col. James Williams, an accomplished Marine pilot who served in World War II, the Korean War and the Vietnam War, and Col. Jack Kelley who

Appreciative Students from The Charter School of San Diego

Appreciative students from The Charter School of San Diego thank the Nice Guys for their wonderful support.

2014 Nice Guy of the Year Denny Sanford on KUSI News

As seen in the UT San Diego, The San Diego Nice Guys have announced their 2014 Nice Guy Of The Year, T. Denny Sanford. You can read the whole article after the snippet below. Congrats Mr. Sanford. T. Denny Sanford was selected as the 2014 Nice Guy of the Year after acing his interview with a committee of club members. He accepted the honor, though,

Family is the main focus of the Nice Guys. The majority of the money we raise goes to help families who have somehow “fallen through the cracks.” A medical bill, a car repair, clothes needed after a house fire, a wheelchair for a young man injured while being a Good Samaritan – this is the type of assistance offered by the Nice Guys. Our goal is always to get people back on their feet and to be, once again, self sufficient.
More...

The Nice Guys have helped hundreds of deserving individuals and families throughout the San Diego community. Each year, we receive hundreds of requests for assistance from needy San Diegans. These requests are individually researched by members of the Charity Committee for approval. Requests come from individuals who might be temporarily unable to work, are caretakers for a special needs family member, or have had some unexpected life changing experience that require one time assistance.
More...

We also depend on generous supporters such as yourself. If you would like to contribute to this worthwhile organization, please Donate Here and follow the simple instructions.
More...
San Diego Nice Guys
Copyright © 2021 All Rights Reserved
Site by Web Sights R Us